Beating with a workforce of thousands of people every single day, the area of Motijheel is the ideal example of how a bustling city functions. The very first impression that you will get is that everything around the area is very fast. Then as you start to get consumed by the exuberance of the area, you realize this is exactly how a city thrives. Landmarks such as Shapla Chattar and Balaka beside the Bangladesh Bank building are there to represent the emergence of the city. On the other hand, you have the opportunity to experience and live in one of the most self-sustained areas of Dhaka. But what draws people from around the city here is the collective spirit of people and the irresistible appeal that makes Motijheel one of the most prominent territories of Dhaka. 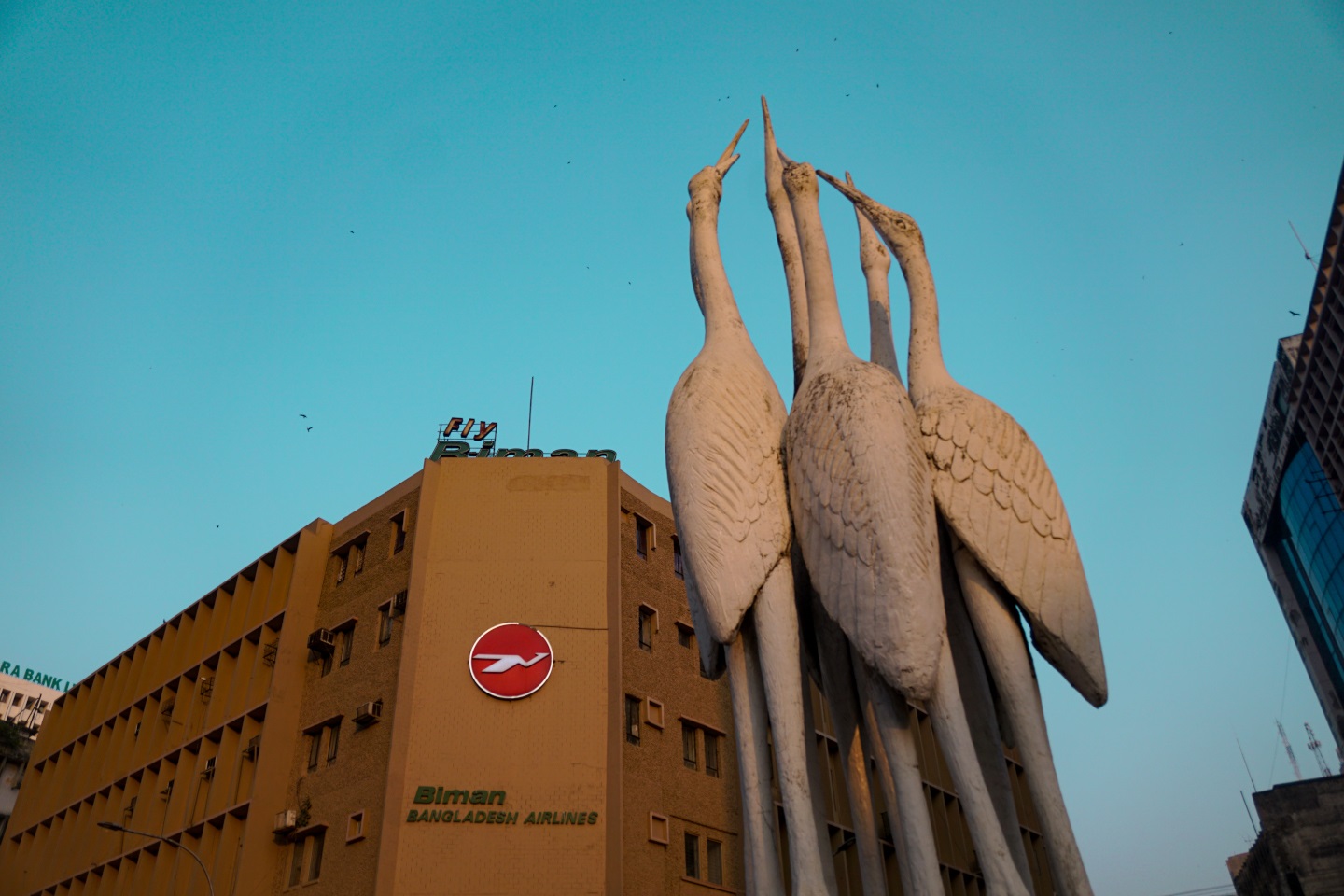 Before independence, the area of Motijheel was a major economic zone of East Pakistan teeming with commercial activities. After the independence of Bangladesh in 1971, along with commercial and industrial settlements, Motijheel became the first area encompassed by all sorts of administrative establishments as well. Which in turn, made this the first administrative hub of sovereign Bangladesh. It still holds the title of being amongst the most important zones of the country. Starting from the Bangabhaban and Bangladesh Bank, other prominent government and non-government establishments including the head office of the general post office Dhaka, Land Reform Board, Bangladesh Inland Water Transport Authority (BIWTA), RAJUK Bhaban, Dhaka Stock Exchange, Jiban Bima Corporation, Bangladesh Chemical Industries, Water and Power Development Board are also located in Motijheel. Meaning the countries some of the most important deals and governing decisions are signed, planned, and issued in one of these administrative buildings located in the area. 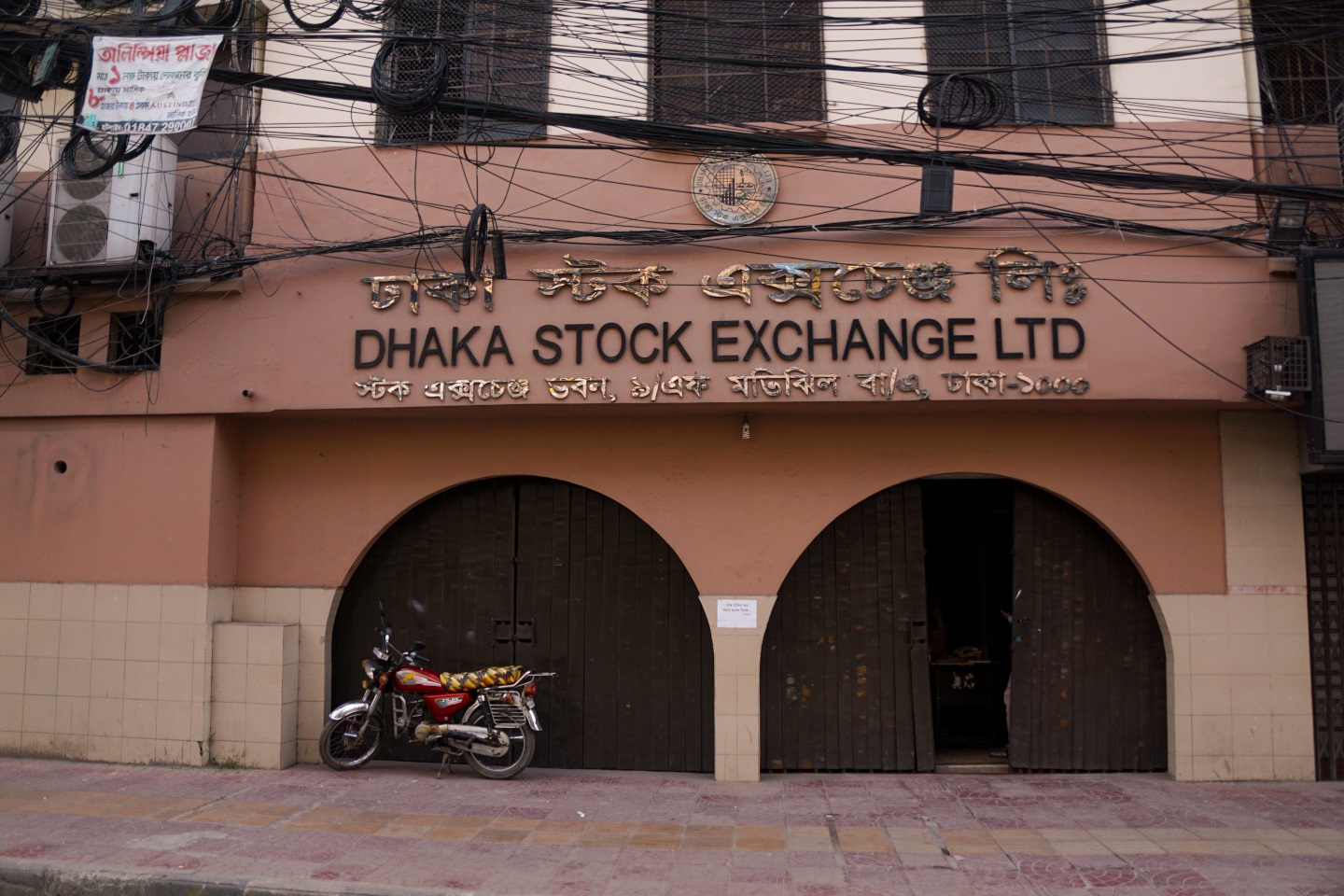 The community of people spreading across Motijheel is as diverse as it can get. People from all walks of life, occupation, and background ranging from as young as only 5 years old to overaged elderly can be seen doing their things regularly. Over the years, these people with different backgrounds, customary belief systems, religions, cultures, traditions, and mindsets have shaped this fast-paced neighborhood of Dhaka. Since most parts of the area are dotted with commercial and administrative settlements, the residential area inside Motijheel is limited. The localities nestled only inside the Arambag area and around the AGB Colony and T&T colony (both of which are a settlement for government employees) are the only residential areas in Motijheel. However, the entirety of Motijheel is thriving with economic activities, therefore, there are plenty of opportunities for your business to flourish. 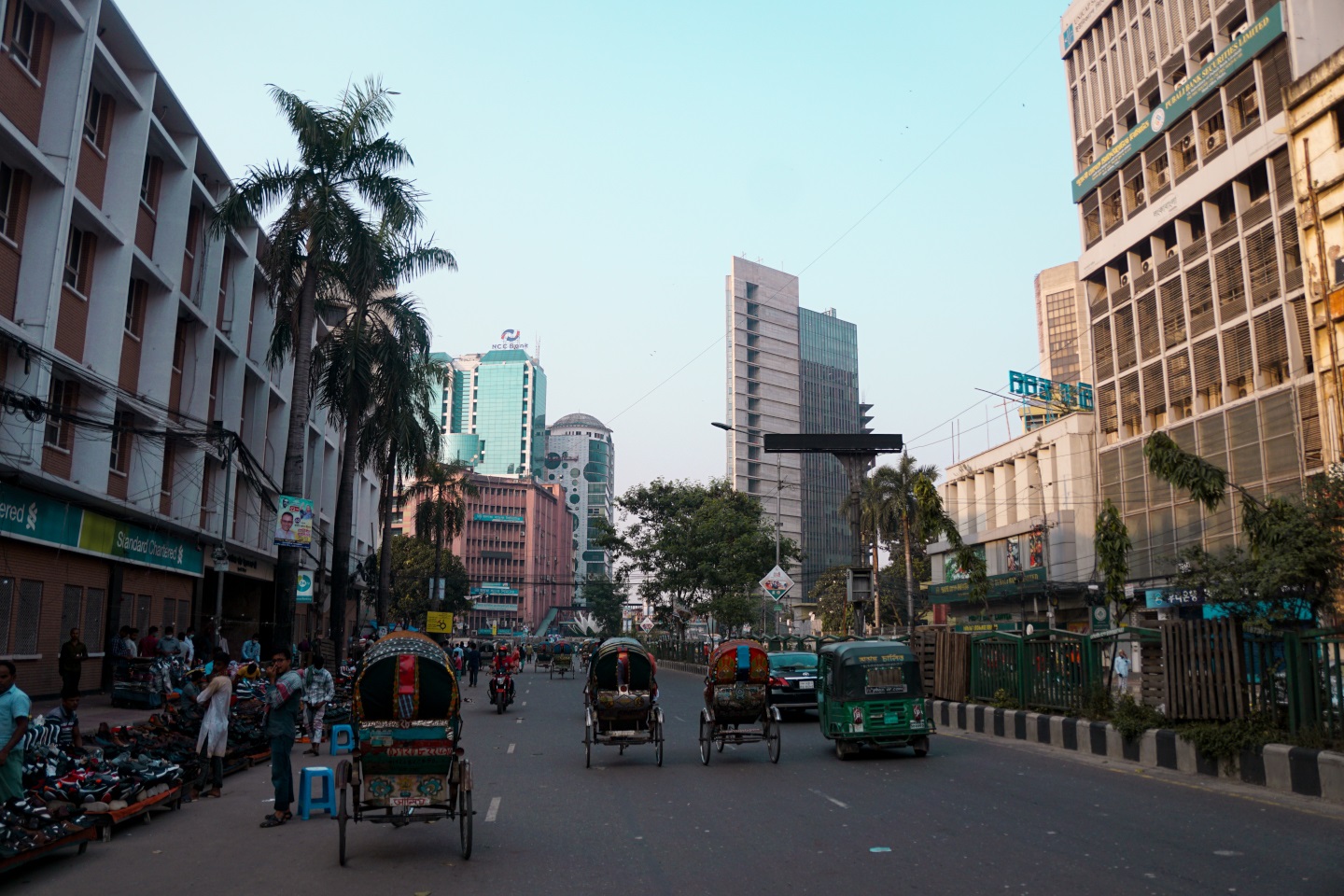 As mentioned before, the entirety of Motijheel is filled with an assortment of prominent administrative offices both governmental and non-governmental. It has more offices and business institutions than any other part of the city. Also, the area houses the largest number of corporate headquarters in the country. Many hotels and media publishers (news, magazines, print) are based on Motijheel. Apart from these, the territory of Motijheel also has the highest concentration of banks than any other area of the city. Along with Bangladesh Bank, the head offices of many banks including Pubali Bank Limited, Sonali Bank Limited are here. Motijheel also houses the tallest skyscraper in Bangladesh – City Centre (37 floors) along with another two of the tallest buildings – Janata Bank Bhaban (24 floors) and Bangladesh Bank (31 floors). The head offices of the Akij group and the Anwar group of industries, two of the largest conglomerates of Bangladesh are inside Motijheel as well. 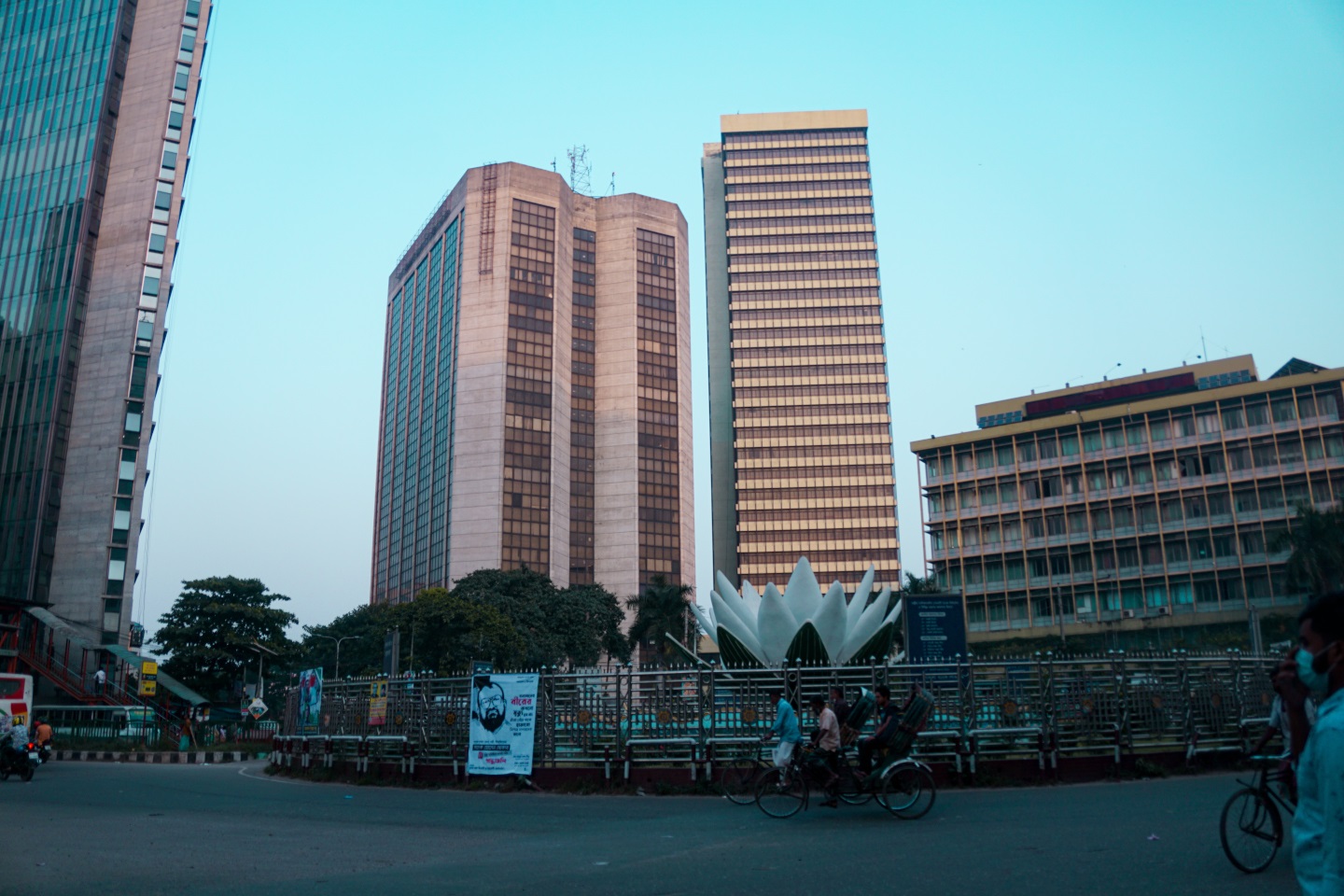 On the whole, the entire territory of Motijheel is connected really well with the rest of the city. Being one of the major commercial hubs of Bangladesh, it is centered around a well-constructed road infrastructure. And there are a variety of transportation options available as well to ensure smooth connectivity throughout. There are multiple inter-district bus counters by the Toyenbee Circular Road as well. Although buses are still the most commonly used transportation system to reach different parts of the area, rickshaws and tempos are also available for quick transportation. Motijheel is also not far away from the country’s three of the most important gateway terminals- Kamalapur Railway Station, BRTC CBS-2 Bus Terminal, and Sadarghat. Of which, Kamalapur Railway Station is connected via Toyenbee Circular Rd and Kamalapur Rd (shorter route). Or it can be accessed via the DIT Avenue Rd and Outer Circular Rd. Take the DIT Avenue Rd to access the BRTC CBS-2 Bus Terminal. 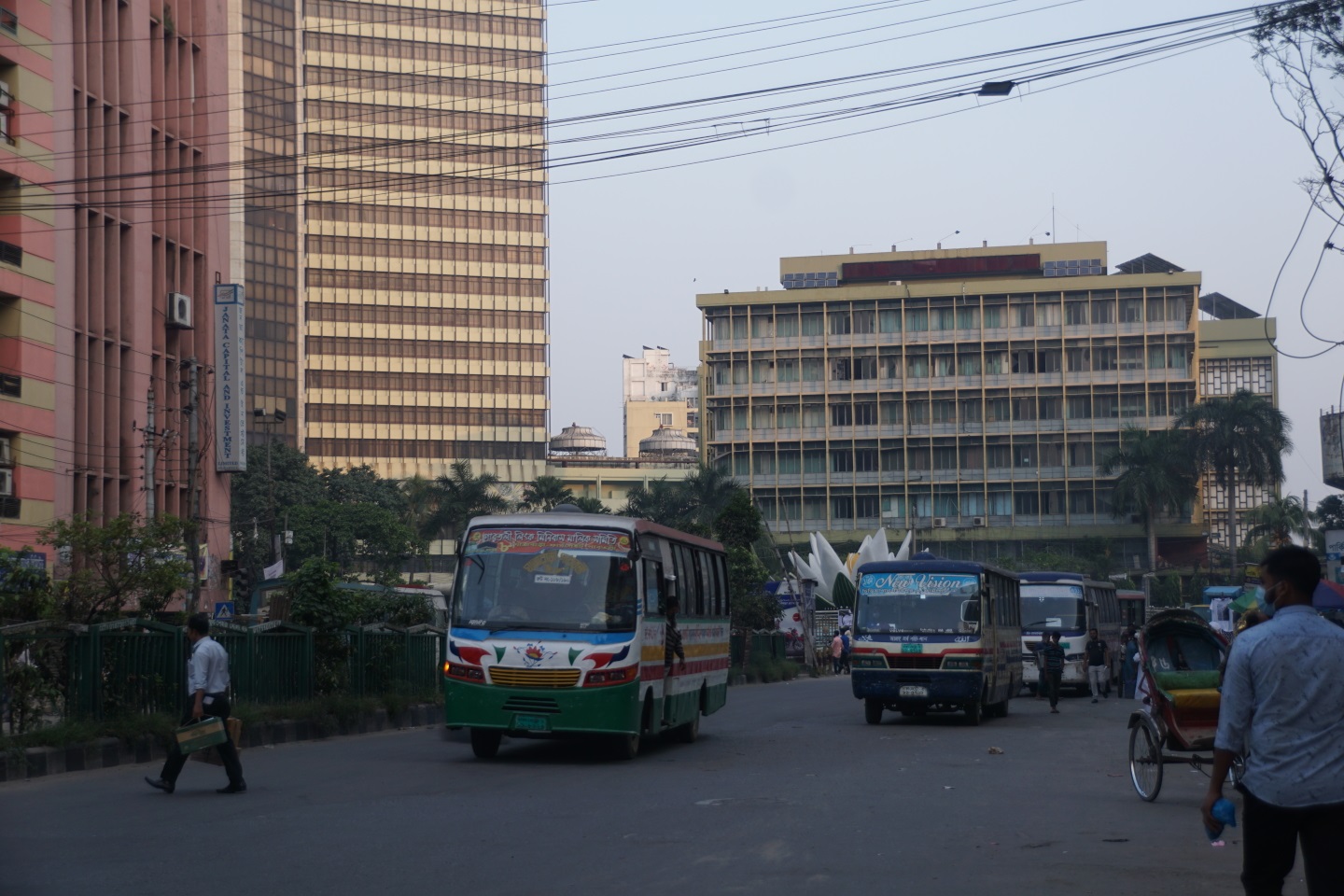 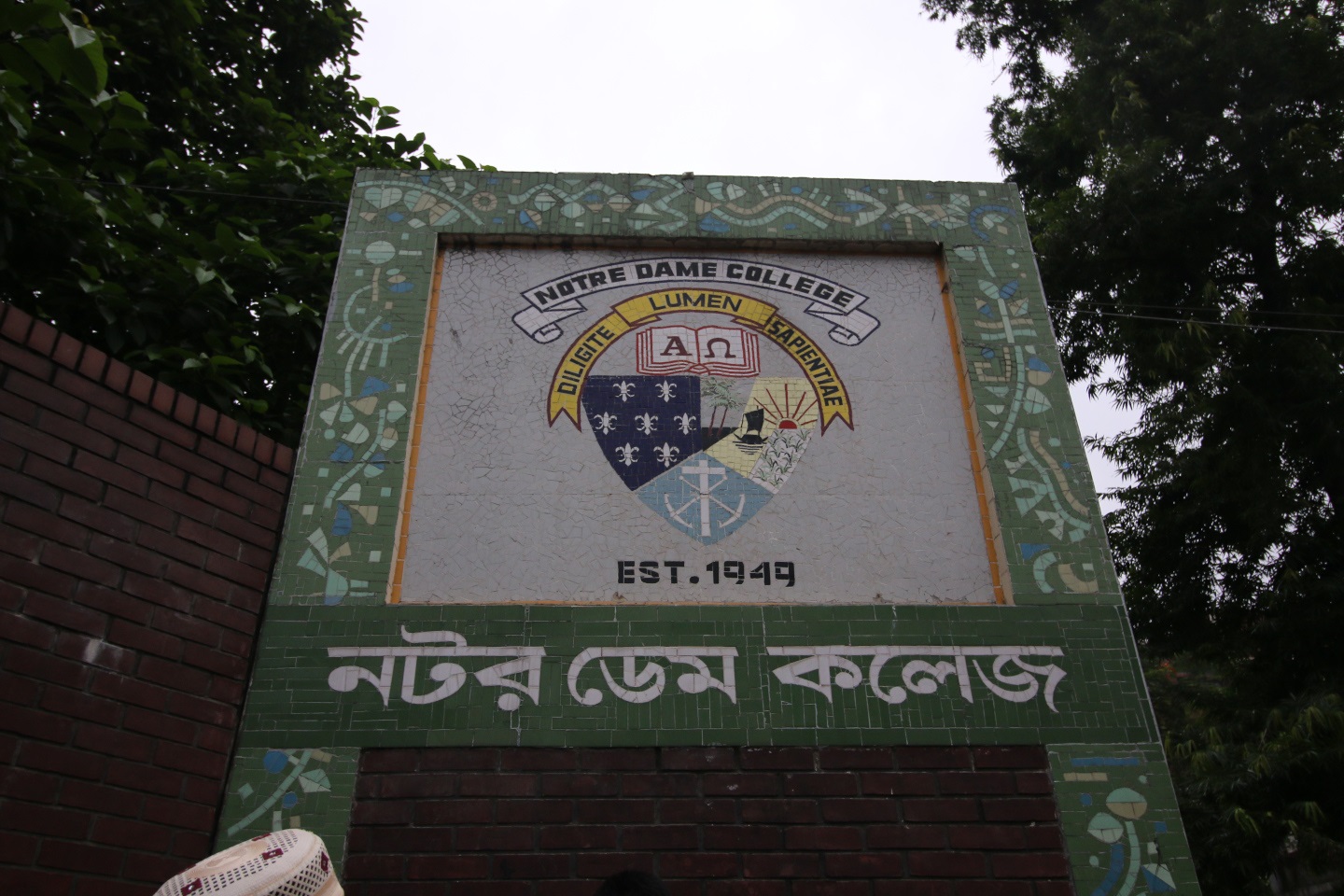 When it comes to medical facility and service, Motijheel may not shine bright beside the areas it is surrounded by, but there are some really good medical institutions inside the boundary of the area. Islami Bank Hospital by the Outer Circular Road, Post office Medical center at T&T colony, and Government Community Hospital at AGB colony are some of the best healthcare institutions inside Motijheel. Other than these, plenty of generalized and specialized hospitals can be found by the Outer Circular Rd and DIT avenue to meet your needs.

Most of Motijheel consists of commercial and administrative settlements. That’s why, other than a handful of playgrounds here and there, there are actually not enough recreational facilities in the territory. That being said, Eidgah & Playground Hospital Zone inside the AGB colony and Squad Playground beside it, post office high school playground, Pragati Playground, T & T colony playground, Arambag Artificial Playground are some of the open places to take a stroll or a short respite. Apart from that, Madhumita Cinema Hall by the Toyenbee road, which is one of the oldest and most popular cinema halls in Dhaka can be a good destination for enjoying movies. 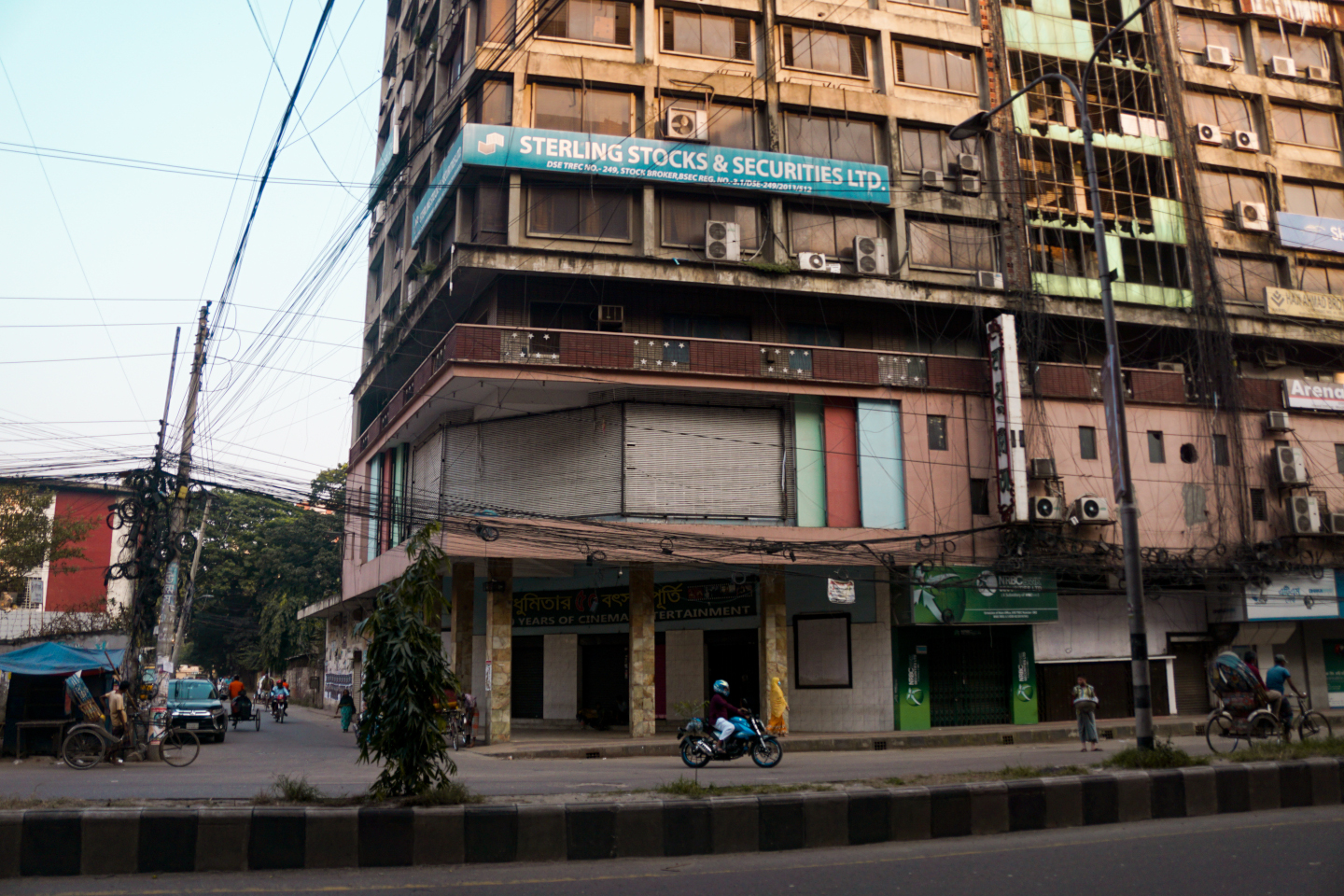 There is no shortage of mosques in Motijheel. There is a mosque in every kilometer of the area so that muslim people who are religiously keen have no problem finding one. Baitul Mamur Jame Masjid, Fakirapul Jame Mosque, Arambagh Jame Mosque, Jhilpar Jame Masjid, Dilkusha Jame Masjid, Banghabhaban Mosque are to name but a few mosques that can be accessed easily. There are several temples including Sri sri durga mandir, Motijheel Hindupara mandir inside AGB colony as well. So the devotees of hindu religion won’t face any problems finding one. 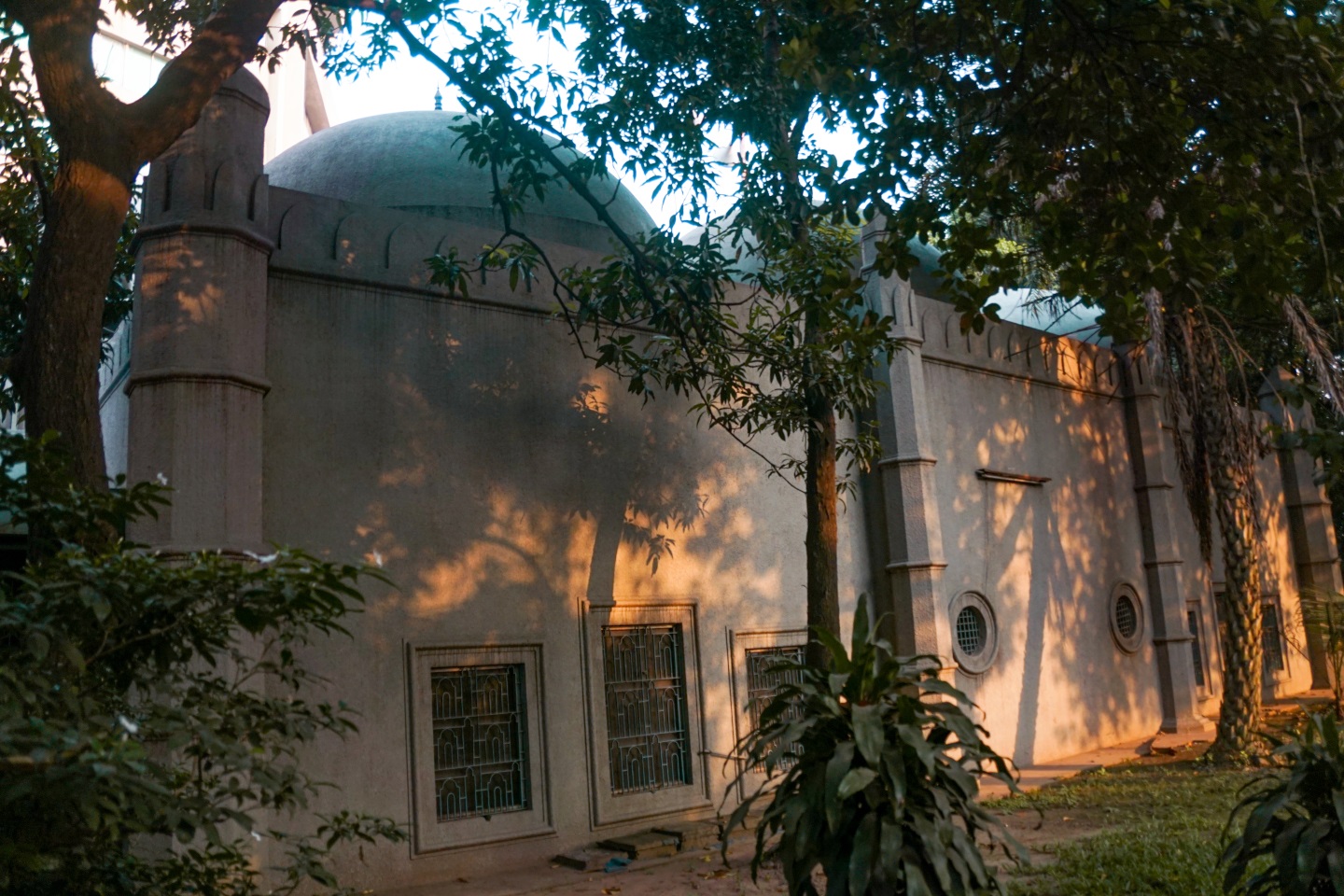 Motijheel is bounded by Paltan, Shantinagar, and Gulistan on the west, Shantibagh on the north, Kamlapur on the east, Nawabpur, Wari, Tikatuli, Gopibag on the south. So access to these important areas, in most cases, is just a bus ride away. Also thanks to the excellent connectivity inside the locality and throughout the entire city, traveling to desired destinations is much easier than most other parts of Dhaka owing to the huge quantity of buses available. Three of the city’s most important and busy gateway terminals are also a short distance away from Motijheel. Many consider that the areas of old Dhaka or popularly known as Puran Dhaka start right after the territory of Motijheel ends.

Motijheel does not just house a large number of restaurants, it houses some of the legendary restaurants of the city. Sharshe Ilish Restaurant, Hirajheel Hotel, Panch Foron Restaurant, Haji Biryani are to name but a few places that offer absolutely delicious local cuisine. Even the smell of those foods can make your mouth water. However, restaurants like Rahmania Rooftop Restaurant & Convention Hall, Business, Bistro 53, and Grand Sultan serve a diverse range of food ranging from traditional to western food. Aside from that, Motijheel is also close to some of the most popular food destinations of Dhaka. That is to say, Paltan and Shegunbagicha have quite a few really popular restaurants with mouth watering dishes. These areas offer all sorts of traditional, oriental, Pan-Asian fusion, and continental cuisines restaurants. Some of them offer rooftop views. 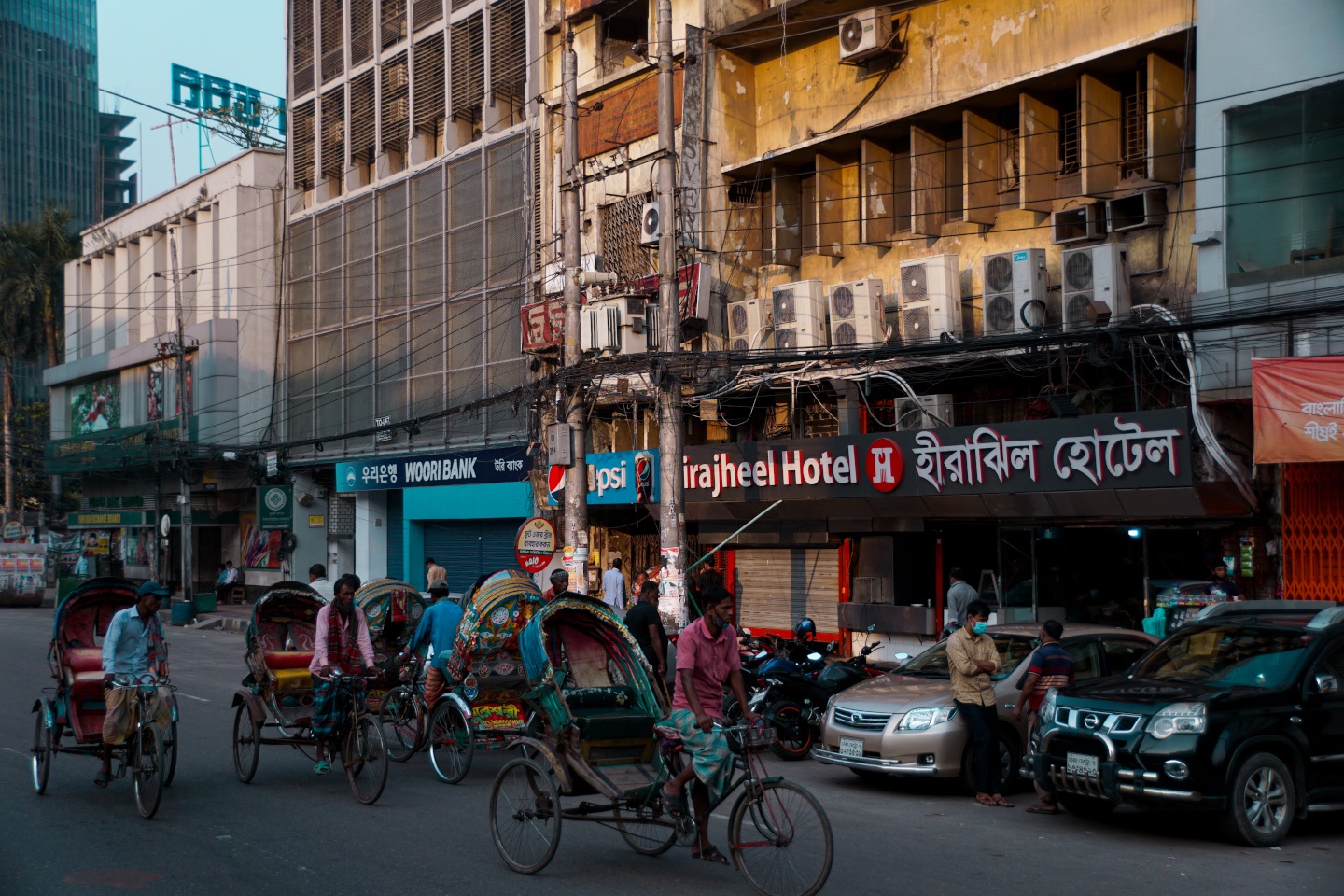 Although there are no notable shopping malls inside Motijheel, you won’t have any problem regarding regular grocery shopping or big budget occasional shopping. There are plenty of departmental and grocery stores at every corner of Motijheel to cater to your everyday needs. Also, there are flea markets all around Motijheel Ideal School and College and Shapla Chattar for buying goods at a much cheaper price. And for the big budget occasional shopping, there are lots of showrooms spreading throughout the locality of Motijheel, offering collections from both local and foreign brands. Aside from Fakirapool Market which is inside Motijheel, popular markets outside the area which are just a rickshaw ride away such as Baitul Mukarram Market and Polwel Super Market can cater to all your shopping needs.